As I think I have mentioned I recently went to a very exciting vegan cafe that is just down the road from us. Well, I have been again and bloody hell, I love it. I have a bit of a tendency to experiment in the kitchen too and after 2 excellent meals at the Vegan Cafe (Vanesha in Crewe if you are interested) I set myself the challenge of having Vegan dinners for an entire week and also to make Vegan cakes.

I tried to recreate the Burgers first and my take is here.  They were absolutely delicious. My second visit to the cafe saw me having vegan pancakes (OMFG so good) and Joe had a full vegan English breakfast which was also delish.

Thursday- Roasted Chickpea Salad with cherries and avocados – it was really yummy and very filling.

Friday –  Chickpea, Beetroot and Sweet Potato Burgers with nutty salad – absolutely lush. The burgers were really flavourful and it was a very filling meal.

… And then we are going camping so I will resume when we return!

On top of doing this I decided to make vegan pancakes.  I trawled through the interweb looking for recipes and came across this stuff called Aquafaba. Now if you haven’t heard of Aquafaba be prepared to be a little bit disgusted… Aquafaba is the water that chickpeas in a tin come in… it literally means bean water and it is used as a vegan egg replacer. Like I said, it sounds a bit yukky but it bloody well works! I used my standard fluffy scotch pancake recipe and honestly, I didn’t think it would work but it actually did! Using Aquafaba is a great, I am right bugger for never having eggs in the house (me and Joe don’t like eggs as eggs) but weirdly we normally have a rather large store of tinned chickpeas. I realise I am probably late to this party but this really has been a total revelation to me!! Haha! Here is my recipe for you…

All you do is stick all the ingredients into a bowl together and give it a jolly good whisk. I’d say whisk by hand until your arm hurts! Heat some coconut oil in a frying pan and then spoon 3 to 4 blobs of mix into the pan (I used an old style ice cream scoop to do this). Heat until the mix is firm enough to flip with a spatula or a fish slice (why is it even called a fish slice? Who slices fish with one!? No one, that’s who!) Pop onto a plate once cooked and repeat until all the batter is used. Serve with fruit and maple syrup. Nommy nommy nom noms! 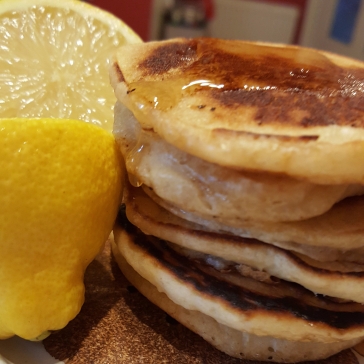 Then I got to thinking… what else could I make with this stuff? Hmmm… muffins! I went to my recipe file and found my muffin recipe and started to adapt and adjust the recipe to make it vegan. I really love messing about in the kitchen, sometimes it pays off and other times, not so much but I love the process of it all. Halfway through the making of my first batch of vegan muffins Dylan appeared in the kitchen and said “remember Mummy, I am your chief taste tester, NOT Daddy. Ok?” haha bless him. Here is the recipe for the first load of Muffins I made and they were totally yummy and unfortunately, quite moreish!

A handful of raspberries

The zest of 1 lemon

Pop all the wet ingredients in a bowl and whisk with the sugar. I used my electric mixer for this. On a side note, I think you could defo use a more unrefined sugar if you wanted to. Those sweet freedom syrups would work, as would agave or maple syrup… I will have a little play in a few weeks and update this with the results!

Add in the dry ingredients and fold together. Next mix in the raspberries and lemon zest and then divide into muffin cases (this mix made 9 muffins for me) and then whack them in an oven preheated to 180°C and bake for 15 – 20 minutes until the tops are golden brown. Allow to cool on a wire rack and enjoy. 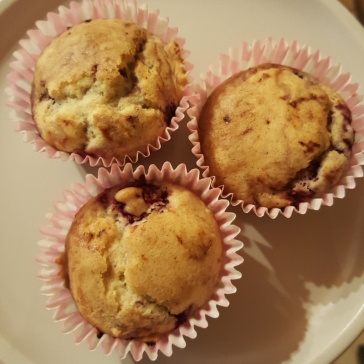 My little chap really enjoyed the muffins and Joe even went as far to say that he preferred them to “normal” cake (considering how much cake I have made Joe over the years this was him very much taking his life into his own hands).

And then on Friday arvo I had some bad news which I will blog about at some point, nowt to worry about folks just a bit sucky. But I needed cake and didn’t have eggs so I made a batch of Chocolate Vegan Muffins to make me feel better! Here is the recipe for them…

Same method as before really. Whisk the wet ingredients with the sugar and then fold in the dry ingredients. Spoon into cases (this time I managed about 7 muffins) and then stick them in an oven preheated to 180°C and bake for 15 – 20 minutes until a cake tester stick thingy (or a skewer) comes out clean when you prod the tops. Allow to cool on a wire rack and enjoy.

You definitely need to try making things with Aquafaba, it really does work and it doesn’t taste yukky at all. Next time you have no eggs but you have some tinned chickpeas give it a whirl (also if you toss the chickpeas in some oil, then add smoked paprika and salt and roast them until they darken in colour and harden, they make a delicious alternative to roasted peanuts)