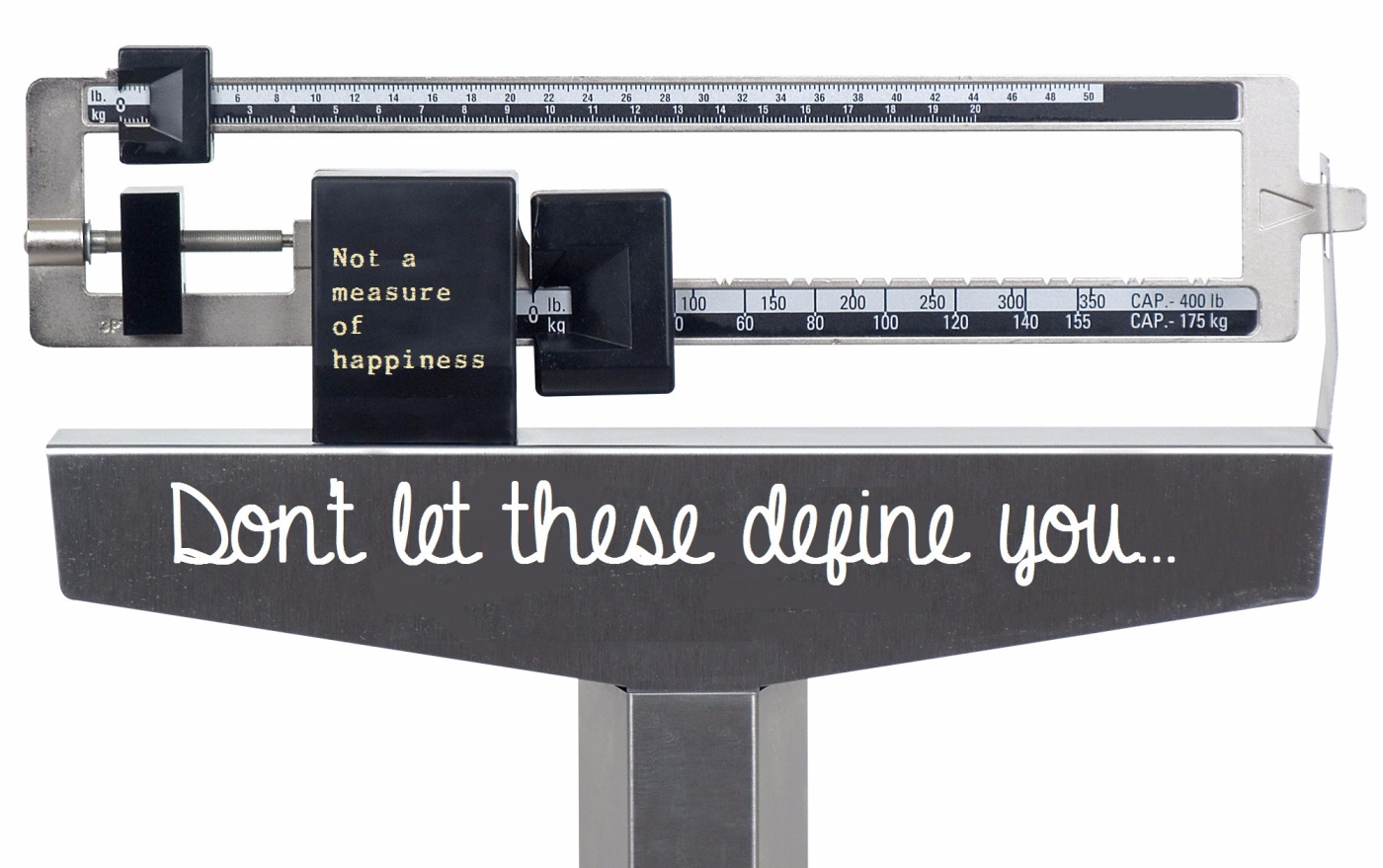 The whole being body positive thing is everywhere at the moment. Women and Men are being encouraged to enjoy the body they have and celebrate it rather than mourn the body they don’t have. Modern life is tough. There are images everywhere of the perfect body, instagramming celebrities photoshopping their own images and having secret surgeries. Coupled with the availability of high calorie, high fat foods and fizzy drinks we really have no chance!

As you probably know I have been on the slimming world train for some time. To start with I did great, I lost 5 and half stone and hit my target when I was 3 months pregnant with Eilys. During my pregnancy with her I gained 17 and half pounds, 15 of which I shed 1 week after having her and putting me back at my target. Pretty good going. It is a story I am really proud of. Despite this I wasn’t happy at this weight so  I lowered my target and lost another stone and a bit, hitting my revised target in December 2015. Then Eilys was diagnosed with Spinal Muscular Atrophy type 1 and my world fell apart. I kept going to slimming world as a form of escapism and sort of stuck to plan. I needed to stay in control with something in my life.  However my weight went up a bit but not drastically. I told myself that I didn’t care. I told myself that in the grand scheme of things it didn’t matter. I was lying to myself. I cared. I cared so much. My weight was something that I had had control over and when everything else in my life felt out of control I wanted to control it so badly but I was failing. After Eilys died my weight spiralled a bit. I just didn’t care. Well, I did but I didn’t have the energy to do it any more.

After a while I tried to pull my socks up a bit. I was so down and sad anyway that I needed something for me to improve my mood. I exercised more and actually followed plan. I lost weight and started to feel better again. I then fell pregnant, yay. I was determined to stick to plan while pregnant again but this time round it was so much harder. To start with as we waited for the appointment to have the CVS procedure I comfort ate. It was around Christmas so I justified it “everyone gains weight over Christmas”.  Then after crimbo I just couldn’t get back on it. When I was pregnant with Dylan my sweet tooth was insane and I was ravenous all the time, with Eilys I craved marmite and wasn’t that hungry but with Evan I craved avocados, I was ravenous and yet again my sweet tooth knew no bounds! Also with Eilys I seemed to have boundless energy and would hit the gym at least 3 times a week until 3 days before she was born but with Evan I wasn’t sleeping very well and my energy levels were rock bottom. Not good!

I tried. I really did but I found it impossible. I felt so bad about gaining weight, which is ridiculous, and it would weigh so heavily on my mind all week. I was driving myself mad. I wanted to eat healthily and for the most part I did but then I would have 1 “naughty” thing and then think fuck it and eat the world. I struggled to keep a lid on my guilt as the number on the scales went up. I laughed about it and made light of it but it was really upsetting me.

I gave birth to my beautiful boy and I went back to Slimming World a few weeks later with a gain of about 28lbs since getting pregnant (I had put on a stone and a bit before getting pregnant). Part of me thought “yeah, that’s fine” but the other part of me was utterly horrified. I was absolutely distraught. And yes, I know I had grown a baby blah blah blah but I was so disappointed in myself and felt quite disgusted. I felt ashamed that I hadn’t managed to stop my weight from spiralling again. Yes, I felt ashamed. It had been really easy during pregnancy number 2 and I felt so bad that I had failed to do the same this time.

Onwards and downwards, I told myself. I bought a slimming world diary and I was a tracking machine. I weighed, I measured and I stuck to the plan 100%. I had changed my weigh day from a Saturday to a Wednesday in that hope that I would behave myself over the weekend but also so I could have my weekends back. I tried to walk for at least an hour a day and I attempted to do a workout or 2 (I attempted 3 times with varying levels of success). After a week I turned up at my new Slimming World group to weigh in. I was a bit confident that I had lost weight, I felt like I had and I felt really good about it. Then I got on the scales…  I had lost 1lb. 1 fucking pound! After a week of trying my bloody hardest. 1lb. Seriously, what the fuck!? I was absolutely gutted and again disappointed in myself. I had a chat with my lovely consultant who was astonished that I had only lost a pound, she checked over my diary and said that I had been spot on and she put it down to me breastfeeding. Blaming breastfeeding can’t be right though, I wasn’t having any extras as I was doing both breast and bottle. Ugh! I was so upset and went home a cried to Joe.

That night as I was feeding Evan at 4am or some other ungodly hour I remembered that I had bought a book about body positivity on the recommendation of one of my lovely instabuddies. This book was called “The Goddess Revolution” and I started to read it that night. So much of it rang true. The guilt, the shame and the upset that goes hand in hand with dieting and weight. It talked about how most women have a toxic relationship with their bodies and I am definitely one of those women. Reading this book made me feel so much better about myself, it wasn’t just me battling these feelings and there were things that I could do to improve how I feel about myself.

I had a couple of weeks semi-doing slimming world but mostly just listening to what my body wanted to eat. I was trying to get in tune with my body. But mainly I was trying my hardest not to berrate myself if I had a treat or ate something that I deemed as naughty. I felt so much better about myself too! I had a lot on in those weeks. Days out with the family, a trip to visit my bestie, a ball and various other things went on and on top of all that I had Dylan going to school, looking after a newborn and all the other things that life throws at you. In short, life got in the way a bit and I missed Slimming World twice. I probably could have dragged myself out but I didn’t want to feel that feeling of letting myself down when I got on the scales. I couldn’t deal with the shame and the guilt.

That morning I weighed myself at home with Joe (as in Joe was in the room and he weighed himself too, we didn’t both hop on the scales). I downloaded the My Fitness Pal app thingy, I added in all my deets and my weight and started to track my food. Everything that goes in my gob goes on the app. No cheating. Yes, I am calorie counting which in a lot of ways is a pain in the ass but I want to make sure that I am not going crazy and like I said, I need to mix things up a bit. I have been doing this for nearly 2 weeks now. I have learnt quite a few new things.  When I listen to what my body wants it isn’t actually all bad things, most of the time I am hankering for fairly healthy stuff.  Every morning I have a bloody yummy, super filling bowl of pumpkin porridge, due to baby being a bit of a whingebag around lunch time I have been using ham as wraps and filling them with salad leaves and dinner has been mostly healthy yummy stuff. The most surprising thing is that I have calories left over for some chocolate or some other snack. And one glorious day I even managed to time feeding Evan just right so I could have a flipping fastastically delicious, incrediballs gin and tonic. Hell yeah!

After 1 week I had lost 3lbs and I weighed this morning for week 2 and I have lost another 1.5lbs (and this week has been Joe’s birthday and I have eaten a lot of naughty stuff). The best change has been how I feel. I don’t feel guilty when I have a “naughty” snack or a meal out etc. It feels great. I am really hoping that I can keep this going as I really feel  so much better about myself. By taking the guilt away I can just relax a bit. I am still in control but not being controlled by a “diet”. For the time being I am very happy with where I am. I know I can lose the weight that I have gained but at present I want to concentrate on my little family and keeping myself sane.