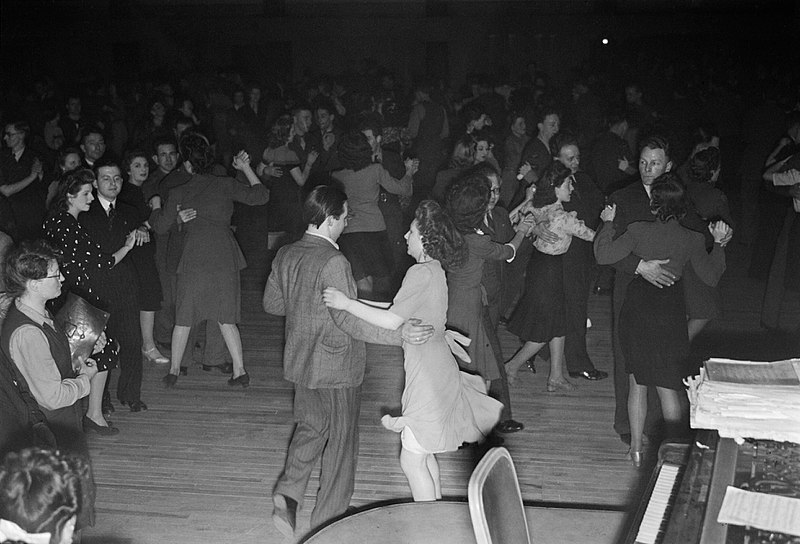 A couple of weeks ago my friend Sarah suggested that we try out a Lindy Hop dance class. Hmm. I was not sure. I knew what Lindy Hop was and it looked like fun but I am not a dance class sort of girl. I am woefully uncoordinated and I really struggle to follow exercise classes and DVDs and generally end up either mirroring the moves or doing something entirely wrong. I did have a Pussycat Dolls workout/ dance move DVD that I did a few times but other than that my dancing education stopped at Ballet lessons when I was 5 (good toes, naughty toes, anyone?).

So off I popped to the class on a rainy Monday evening. My first hurdle was that the car park was rammoed. There was 2 spaces left, one was in front of the entrance to cemetery which I presumed was a no-no so I parked in the other. Just. I hate parking. It is the worst. I am not the best at it. I then tried to get out of the car. Nope. There was no where near enough space. Fuck it, I thought, I am not parking again, I’ll get out of the passenger side… nope! No room there either. There was no way I was going to climb out of the bloody boot. Grrr. So I reversed out of the ridiculously tight space and drove around the little village trying to find a bloody space.

I parked. I walked to the village hall and I waited outside the door for the class to start. There were a few people waiting so I ducked into the loo. Which is where I bumped into Sarah. We chatted and then went back outside, more people turned up. I felt a little nervous but the class was called “Absolute beginners” so how hard could it be!? Right?

The other class ended (ballroom dancing, very nice!) and we all filed in and paid our money. There was a little chatting and then we were told to form 2 lines. Me and Sarah went to the back. And the warm up began. It quickly became apparent that a) this class wasn’t really absolute beginners and b) that everyone else knew exactly what they were doing! Brilliant.

I stumbled and laughed my way through the warm up and then the instructors said we’d be dancing “Pencil full of lead” and that most of the dancing would be variations of the Charleston. The instructors went over the steps so quickly but after a few rounds I got the basics… I messed up a lot but hey, it was my first time. So far so good. We started to talk to this guy next to us, he seemed to know what he was doing. Oh and I didn’t mention that it was BOILING hot even though it was raining… I was a sweaty mess. After 2 goes of “Pencil full of lead” it was time for a break of squash. I made a big mistake in my choice of squash… orange, what was I thinking and it was ridiculously strong (why don’t other people ever make squash to the correct strength). I was having a lot of fun. It was out of my comfort zone and I was utterly hopeless at remember the steps but we were all dancing in a line and it was fairly anonymous so it didn’t really matter.

After the break was over we were told to line up at either sides of the room for the next dance… What could go wrong!? Well, as it turns out a lot can. The lines then walked together and paired off for the actual dancing to start… OH FUCK. Joe had joked a few times about not liking the idea of me dancing with other men (I think he was joking…) but I said “nah, that won’t happen” and assured him that I’d just be dancing with Sarah if we had to get paired off… I really thought that I would dancing on my own or with the Sarah. I was not expecting this! Panic set in. My facial expression was set firmly to “deer in the headlights”…

And this is when it all went a little bit to shit. So the class had mostly all been absolute beginners in January but it is 5 months on and they have learn quite a lot. They were several moves into a dance already. The first guy I was dancing with was the chatty man from the first few dances. We had to be quite close for the dance which was awkward to say the least and coupled with me not knowing what I was doing, made for a weird situation. I think I have only ever danced like that once at my wedding with my husband and I found that awkward!! The video footage proves the awkwardness of that dance, haha. I don’t really like being that close to people what I don’t know very well. I really hate the dentist or the optician because I panic when they get close to my face and a very stupid part of my brain thinks that I should kiss them (I never do obviously, yuk). So yeah, awkward. I actually have both the dentist and the opticians this week, this week is basically a week where I feel awkward a lot.

After a few goes at the dance moves I was getting the hang of it and looking over at Sarah she was too. Great. I was starting to relax and enjoy myself. Then the instructor said that it was time for the followers (me) to move to the next partner… Great! More awkward introductions. “Hi I am new, I have no idea what I am doing”. We changed partner about 10 or more times and each time the same conversation…

“That’s ok, we all have to start somewhere. Have you done Lindy Hop before?”

“Nope. This is my first dance class”

“Oh what other dances have you done before?”

“Nope, no dancing ever. This is my first class”

Over and over! It got less weird with each partner. Some of them were really good, others not so much but they were all so lovely and took their time with me and helped me with the steps. It was a lot of fun.

All in all I really really enjoyed myself at the Lindy Hop class and I am really glad that I took myself out of my comfort zone and I will definitely be going to the class again. I was hot and sweaty and had absolutely no idea what I was doing most of the time but it was a laugh and I really really enjoyed it. Thanks Sarah for kicking me up the ass and going to the class!